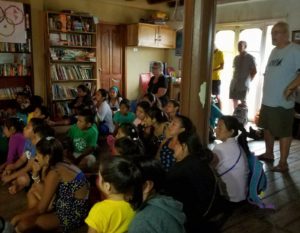 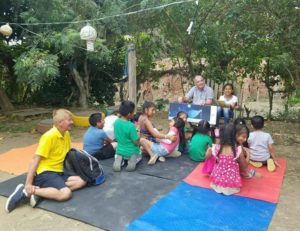 In early October we said goodbye to Szilvia, and we also began to plan for our next theme. Following up the success of the Clara Luna Olympics was a difficult task, but we decided that a theme like the Legends (Leyendas) of Ecuador would be appropriate for a month that includes Halloween and Dia De Los Muertos!

During the week of October 9, we enjoyed Club de Ninos on Wednesday by finishing up with one of our September books, La Manzana Roja, by painting trees and drawing animal characters and doing a red tempera paint apple print on the tree–messy, but the children had fun doing it!  We also were treated on Friday after Club de Ninos to a teatro, Adan y Eva, performed by a traveling couple of actors from Switzerland. The play was very entertaining and the children were laughing their way through most of it.  We said goodbye to Lucas on Friday and Laura on Saturday, and then the Clara Luna House got a bit more quiet for the rest of the month. On Saturday October 14 we worked with Club de Jovenes on a sensitive topic regarding understanding personal space and how having a good understanding of it links up to proper behavior in social and dating situations.

During the week of October 16 we presented two of our Leyendas to the students during Club de Ninos – La Mano Negra (on Wednesday) and Etsa–Leyenda de Oriente (on Friday). We did crafts for each of these legends–spiders made out of hand-prints for La Mano Negra and colorful construction paper birds to be used for decoration for the puppet show in the upcoming Erase Una Vez–for Etsa.  On Saturday the Club de Jovenes learned about birds of Manabi Province and made some larger and more colorful birds to be used as set decoration for the puppet show.

During the week of October 23, we read the last two of our legends to the kids at Club de Ninos on Wednesday.  We also did crafts for each of these legends, making white handprint ghosts for La Dama Tapada and colorful crepe paper cut-out calacas (skulls) for La Caja Ronca–to be used for decoration in the upcoming Erase Una Vez on Friday. The Erase Una Vez on Friday was a big success. We had readings of each of our legends by some of our Club de Ninos students, a reading of another leyenda, La Madre Goyita, by Valeria Saenz, and the puppet show Etsa was put on by four students from Casa Búho in Machalilla. Puppets were made by Trish, and our decorations looked fabulous! On Saturday, the Club de Jovenes students traveled to Ayampe with Ed, Alex, and Lobo to watch the release of some endangered Papagayo birds into the wild as part of our focus on learning about the native birds of Manabi province.

Also on Saturday, Paola, Joseph, Linda and Scott left early in the morning for a weekend-long visit to Canoa, Tabuchila, Río Muchacho, San Vicente, and Chone in northern Manabí province. We visited many locations in these areas and gave the kids a chance to read for a while, sing and dance along to Chumba La Cachumba, listen to a reading of each of the leyendas, and watch a presentation of the puppet show Etsa.  As Szilvia said about the trip to the north last month, it was amazing to be able to make the children laugh and be happy!

We returned to Puerto Lopez late on Monday October 30 and awakened to find that another volunteer, Antonia, had arrived from Quito (and Germany!) by bus overnight–Happy Halloween! We enjoyed the day getting to know each other and ended it at a local restaurant watching the kids of the town go by in their costumes.  October was a great month at Clara Luna, and we are looking forward to November and more leyendas!