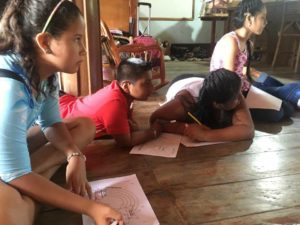 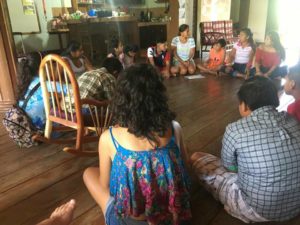 Clara Luna planned many activities of Club de Niños during this month around the celebration of
courageous and influential women of the world. One source of inspiration and information about heroic
women was the book “ Cuentos de Buenas Noches para Niñas Rebeldes “ ( Good Night Tales for
Rebel Girls) by Elenea Favilli and Francesca Cavallo.
This book tells of the extraordinary lives of 100 brave women and, in addition, features the illustrations
of 60 artists from around the world.
Volunteers Marie, Maelle and Yesica read the stories of their lives and their struggles and then the
children illustrated their deeds on posters.
Some of the selected stories featured Wangari Maathai, a Kenyan biologist, environmentalist and the
first African woman to receive the Nobel Prize. She was known as the &quot;Tree Woman&quot; for having
promoted the planting of millions of trees.
Policarpa Salavarrieta was a hero and martyr in the Columbian fight for independence from Spain.
The story of Malala Yousafzai, who was shot in the head when she returned by bus from the school to
her home was of great interest to the children. The reason for the attack was clear: this 16-year-old girl
had dared to raise her voice to defend rights of girls to be educated. We staged a puppet show that told
the story of her fight for education and the bravery she exhibited.
Volunteers Ed, Dallas and Mercedes continued English lessons with their respective classes.
Once Upon a Time, a monthly program, spotlighted young readers, Flavio, Jaime and Harold, reading
short stories to an audience of parents and peers.
The Disabilities Club learned to make ceviche, cleaning the fish, chopping the ingredients and squeezing
the limes. Then we had a delicious meal. We also went surfing. Many of the participants ventured into
the surf for the first time and discovered that they loved it. Special thank you to Adam and the surf crew
from Ayampe. See the video by Brian Bautista.
March was a busy and fulfilling month at Clara Luna.