November in Clara Luna rhymes with Girl Power!
As you guessed, the month of November was dedicated to rebellious women who fought for their rights, who struggled to get justice, and who did everything they could to acheive their dreams.
During each « Club de Niños » we presented a woman or group of women considered « rebeldes ». We started with Frida Kalo as a transition with the mexican Día de los Muertos in October. And we made a world Tour, starting of course with Mexico, then Iran with Yusra Mardini, Pakistan talking about the incredible Malala Yousafzai, travelling through Italy and the Maria Montessori’s innovating system of education, and finishing this incredible journey with the Mirabal sisters in Dominican Republic. This tour allowed children to get to know women’s conditions throughout the world, see  that war is still running in some countries, that children can’t always go to school and understand that men and women must be equal and must have the same rights.
We got to know various famous rebel women. We learned together how was the political situation in Pakistan and Iran, we learned the meaning of the word « refugiado » and admired the strenght of Malala and Yusra, as examples of bravery. We made homemade medals that children offered to their mothers, to show how strong and brave they are. We made our own butterflies to celebrate the power of the Mirabal Sisters, also knonw as « Las  mariposas ».
The mothers also celebrated during November as we organized a photo session with accesories to remaind us that we’re mothers, but we are also women and proud to be, no one can’t blew this off, not even the wolf of the little red riding hood, because when you say « Dije No!» it’s no. We stand for the women’rights and against gender violence. We all worked on the children’s rights : to education, to be loved, to have fun, to alimentation, to have an identity, and so on. And we made an awesome video about it as a fun souvenir of the month and to celebrate el Día Internacional del niño.
Our event « Érase una vez » was also dedicated to women and we really wanted to work on gender violence. After searching for old socks to make the puppets, a group of 5 kids participated to the muppet show called « La princessa vestida con una bolsa de papel » where the Prince Ronaldo and the Princess Elizabeth are supposed to get married but a dragon burns their castle and sequestred the Prince. Elizabeth’s clothes got burned in the fire, she only finds paper bag to use as a dress. She’s really intelligent and succeeds in munipilating the dangerous dragon so that she can save Ronaldo. The only thing he says when he finally get free thanks to her is that she looks terrible in her paper dress, and doesn’t look like a real princess anymore. So Elizabeth reponds « Eres un TONTO » and they never got married. It’s was simply amazing to see how children reacted to this story because it was funny obviously, but it was also meaningful.

«One child, one teacher, one book and one pen can change the world» Malala Yousafzai. 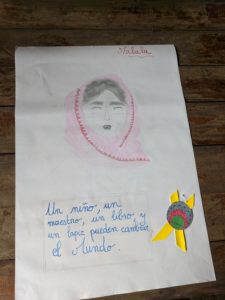 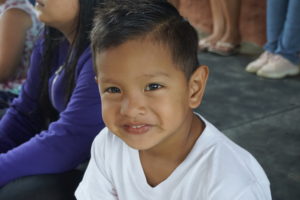 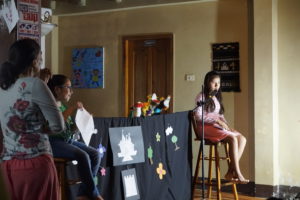 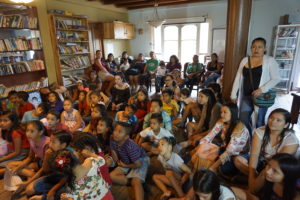 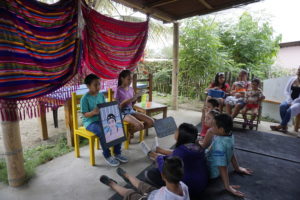 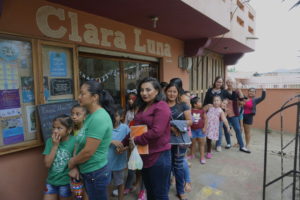 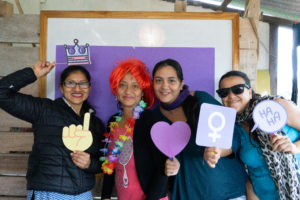 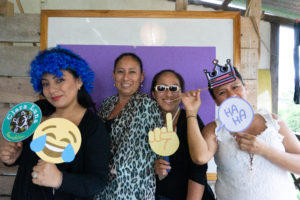 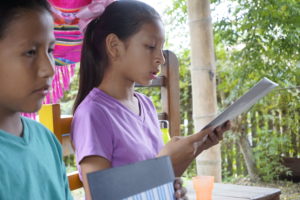